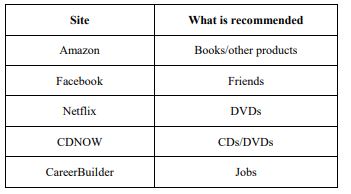 Collaborative filtering:-It recommends items based on the similarity measures between users and items. The system recommends those items that are preferred by a similar category of users.
Collaborative filtering has many advantages
1. It is content-independent
2. In CF people make explicit ratings so real quality assessment of items is done.
3. It provides effective recommendations because it is based on user’s similarity rather than item’s similarity.
Content based filtering:-It is based on the profile of the user’s preference and the item’s description. In CBF, to describe items we use keywords apart from user’s profile to indicate users preferred likes or dislikes. In other words CBF algorithm recommend items or similar to those items that were liked in the past. It examines previously rated items and recommends the best matching item.
Demographic Filtering:In demographic filtering recommendations is established on a demographic profile of the user. Here recommendation is based on the information provided by the user is considered to be similar according to demographic parameter such as nationality, age, gender etc.
Hybrid filtering:The hybrid filtering is a combination of more than one filtering approach. The hybrid filtering approach is introduced to overcome some common problem that are associated with above filtering approaches such as cold start problem, overspecialization problem and sparsity problem. Another motive behind the implementation of hybrid filtering is to improve the accuracy and efficiency of recommendation process.
Major challenges in recommender system
The following research can be followed for better understanding:
“Survey on Collaborative Filtering, Content-based Filtering and Hybrid Recommendation System”

We are here to help you in your education. We do share content related to Post Doc, PhD, Master’s Degree and other education related news. Keep subscribe us and never miss any latest news.